Very different processes are involved in neurodegenerative diseases such as Alzheimer's or Parkinson's. These include, for example, inflammation mechanisms, protein metabolism or the regulation of nerve cells. These and other topics are therefore part of the program of the Eibsee Meetings "CELLULAR MECHANISMS OF NEURODEGENERATION", which take place annually at the Eibsee south of Munich. Around a hundred scientists from all over the world take part and present their latest results in research into these diseases. In addition to the invited speakers, young researchers also take part; some of whom will present their research results in poster sessions.

The Eibsee meeting is funded by the Hans and Ilse Breuer Foundation and was founded in 2000 by the Munich scientist Prof. Christian Haass, member of the Board of Trustees, and the researchers Prof. Volker Herzog, University of Bonn, and Prof. Gerd Multhaup, independent University of Berlin, launched. The German Research Foundation (DFG) supported the conference for six years with the priority program SPP 1085 "Cellular Mechanisms of Alzheimer's Disease". During this time, the Eibsee meeting has established itself as one of the most important German Alzheimer's conferences.

From 2005 onwards, the Eibsee Meeting was the annual meeting of a collaborative research center of the medical faculty at the Ludwig Maximilians University Munich (LMU), SFB 596 "Molecular Mechanisms of Neurodegeneration". This laid the basis for the establishment of a cluster of excellence under the name "SyNergy - Munich Cluster for Systems Neurology" and led to the establishment of a new institute. This is the Munich location of the German Center for Neurodegenerative Diseases (DZNE). Since then, the DZNE Munich and SyNergy as well as the Hans and Ilse Breuer Foundation have been the organizers of the annual Eibsee conference.

More information about the Eibsee meeting can be found here ... 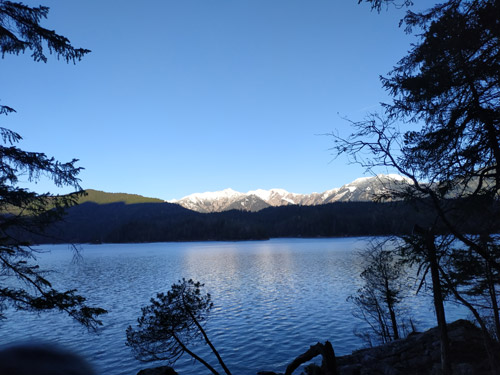 Every year in autumn, about 100 international researchers gather at the foot of the Zugspitze to discuss their recent findings at the Eibsee-Meeting. The meeting is organized by Prof. Dr. Christian Haass and supported by the Hans and Ilse Breuer-Foundation, amongst others. For this 19th meeting four keynote lecturers were invited to not only show their recent findings but also to give an introduction into one of the main topics of this year’s meeting. Besides the well-known researchers, junior scientists also had the chance to present and discuss their findings in a poster session.

The focus of the meeting was on the connection between lysosomes, autophagy and glia cells in neurodegenerative diseases, as well as on biomarkers for Alzheimer’s disease. During the first two days, the function of lysosomes and the role of autophagy in the development and the progression of neurodegenerative diseases was discussed. Lysosomes are vital organelles for every cell and responsible for the degradation of different molecules, like proteins inside as well as outside the cell. Redundant or defective proteins are separated via the process of autophagy and subsequently degraded in lysosomes. At the conference, it was postulated that the localization of the lysosomes within the cell might decide if a cell can maintain its normal function or not. Furthermore, data were discussed that the function of lysosomes seems restricted not only in neuronal ceroid lipofuscinosis (NCL) but also in Alzheimer's and Parkinson's disease. NCL is the most common cause for neurodegenerative diseases in children. In NCL the lysosomes can be malfunctioning and there is now evidence that autophagy is impaired already in early stages of the disease. Recent findings presented at the meeting support the idea that increased degradation of proteins in the lysosomes induced by certain drugs might be able to counteract that.
The second day started out with a very important protein in the context of neurodegenerative diseases, the tau protein. The tau protein is thought to stabilize so-called microtubuli. They are responsible for the mechanical stabilization of the cell and its shape, as well as for transport within the cell. Diseases such as Alzheimer's and Parkinson's disease are associated with a loss of function of the tau protein. At the Eibsee-Meeting, findings were discussed that this protein can adopt different structures in different diseases and that this might be the reason for the manifestation of different clinical pictures.
The third day was devoted to therapy strategies and biomarkers for neurodegenerative diseases. Biomarkers, parameters of biological processes, can be measured, for example, in the blood and are used for diagnosis or to monitor disease progression. The tau protein is one example of an established biomarker for Alzheimer’s disease. During the course of the disease, the tau protein is modified and this modification can be monitored. Researcher could show now that these changes do already occur several years before the onset of symptoms. Currently, there are already several biomarkers for Alzheimer's disease, but early diagnosis before the first symptoms occur is still a major challenge today. Prof. Pierluigi Nicotera, Scientific Director and CEO of the DZNE, concluded the conference with a lecture in which he evaluated previous findings and clinical trials and discussed possible paths for the future.

The program of the eibsee meeting can be found here.

The Eibsee-Meeting is an annual conference about the cellular mechanism of neurodegenerative disease. This year, the meeting, which is held at the foot of the mountain Zugspitze, took place for the 18th time. It not only attracts researchers from Germany, but also many international participants. Since its beginning in the year 2000, the Hans and Ilse Breuer Foundation supports the meeting along with Prof. Dr. Christian Haass (member of the board of trustees). In addition to top-class invited speakers, the meeting gives young researchers the opportunity to present and discuss their up-to-date research.

Every year, the meeting has both its general title “cellular mechanisms of neurodegenerative disease” and additional sections about interesting and current topics. This year’s focus of the meeting was phase separation, inflammation and the gut brain interaction. Additionally, there was a special section about the collaboration between Washington University in St. Louis and SyNergy (“Munich Cluster for Systems Neurology”), the excellence cluster of the LMU and TU Munich.

For example, one topic of discussion was aberrant phase separation, that can occur when differences in salt concentrations during protein translation or between interacting molecules change the biochemical properties of a protein. One can visualize this phase separation like the separation between oil and vinegar, and it is a normal and important process in every body. However, a disturbed or abnormal phase separation can support the deposition of proteins in the brain and thereby be an initial step in developing dementia. An additional focus of the meeting was the myelin layer around axons. The myelin layer is a fat-like sheath around nerves, which allows signals to pass much faster. If this sheath is disrupted, the flow of information is reduced, resulting in neurological disturbances occur. A prominent example for this is multiple scleroses (MS). To find possible treatment it is very important to understand how this fat-like sheath develops or reacts in the case of an injury.

In the last years, it has become increasingly clear that, not only can changes in proteins lead to neurodegenerative diseases, but that the diet, the microbiome or diabetes can influence the risk for neurodegenerative disease. Thus, there are not only hints that the composition of the gut microbiome can influence the outcome of a stroke, but also that patients suffering from autism have a similar gut microbiome.

Next year, the main focus of the conference will be lysosomal dysfunction and the so-called neuronal ceroid-lipofuscinosis (NCL). NCL is a metabolic disorder where patients suffer from a dysfunction of lysosomes. Lysosomes are important cell organelles and degrade foreign material in addition to the body`s own substances. If this process does not function as normal, an increased deposition of toxic substances occurs, and patients suffer from epilepsy, hallucinations and dementia. Moreover, it was shown that there are common pathological hallmarks between NCL and frontotemporal lobar degeneration (FTLD), which makes it even more interesting for research, as common mechanisms can give a hint of possible treatments or disease causes.

The program of the eibsee meeting can be found here

The program of the eibsee meeting can be found here ...

The program of the eibsee meeting can be found here ..